So I created my own writing system for Everwind. It’s been a long time coming, as I’ve attempted this probably 5 or 6 times since I started writing the Everwind series, and a few times even before that, just for fun. I’d be lying if I told you I wasn’t inspired by the Elven script Tolkien created for Lord of the Rings. In any case, I just made the finishing touches on it last night, and I am thoroughly pleased with it. A little background.

Much of the Everwind backstory, which will eventually come full circle, involves a massive push about 8000 years prior to current events to rid the world of magic. One of the last wizards left alive after this holocaust was the mage named Atury, who was also known as the Glyphmaster. Legend has it that Atury made himself the best at writing enchanted glyphs because he suffered from a speech impediment. The system he created for his own use is the same one I just designed. What is interesting to note about it is that it functions both as a magic system and a writing system, which is how he disguised it from any who would seek to steal his arcane knowledge. The glyphs he used in the writing system had serifs to connect every character. When used in magic, each character’s serifs were removed so they could be used individually.

There are 42 characters total, plus one dot character that appears above any character that would be repeating (ss or ll, for example, would be just one s or l with the dot above). The system is entirely phonetic, meaning that sounds are represented in the characters. Unlike English, where some characters have more than one sound, Aturian does not. For this reason, there is no representative for the letter C, as these sounds are covered by K and S. Also unlike English, there are characters for ch, sh, and th.

Some consonants have high ascenders, while vowels do not.

All vowels have low descenders, and they are the only characters with this feature. Some vowels also have accents, which change how the vowel is pronounced. For example, a basic A would be without any accents, and carries the sound as in the word “fall.” One accent mark to the letter A denotes a prolonged aww sound; two changes it to a lowercase a, as in “cat.” Finally, the third accent denotes a prolonged lowercase sound of the character.

Whole words are differentiated from one another in that each containing character is connected. Words are separated by a space.

See the image below for the translation guide. I plan to make a workable font for this in the coming months. 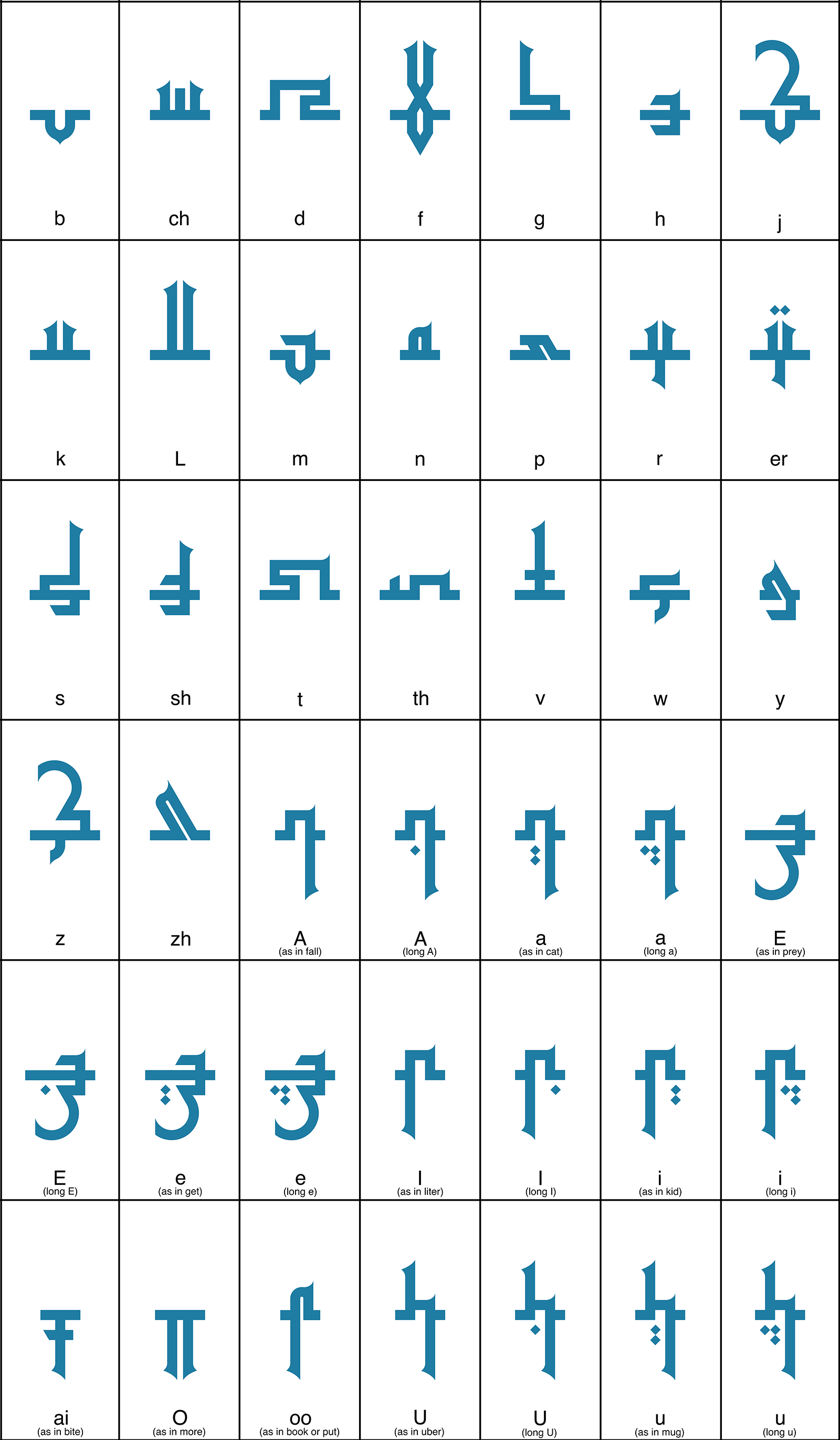 I believe in making the world a better place through spreading logic and reason. I believe everyone should focus on improving themselves over looking for other people to blame. I believe in free thought. I believe in justice and freedom. I believe we can solve problems by leveraging more minds and through improved communication. I believe in building people up.

People love to find excuses to avoid something. It’s one thing I’ve learned over the years from being a personal trainer, a

For as long as I can remember, people have been bitching about celebrities voicing their opinions. Should celebrity opinions matter? Doesn’t matter

The highest responsibility of any form of government is that of the application of justice. As government’s sole purpose for existing ought

Indoctrination entails spreading an idea by duress. It leaves the victim with no other choices. Control

We Shouldn’t Force Kids to Recite the Pledge

People love to find excuses to avoid something. It’s one thing I’ve learned over the years

The highest responsibility of any form of government is that of the application of justice. As

For as long as I can remember, people have been bitching about celebrities voicing their opinions.